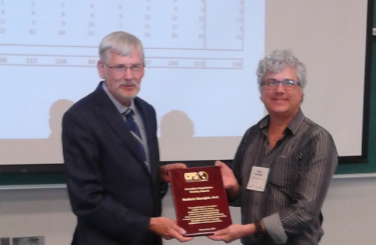 The Canadian Population Society Lifetime Award honors a scholar who has shown outstanding commitment to the profession of demography in Canada and whose cumulative work has contributed in important ways to the advancement of the discipline, through publications, teaching and service. The award committee is pleased to announce this year’s recipient as Roderic Beaujot, Professor Emeritus at Western University.

With a PhD in Sociology from University of Alberta (1975), Rod started his career as a demographer at Statistics Canada. After a few years at Stats Can, Rod moved to the University of Western Ontario (now Western University). From the latter 1970s through to the present, Rod established an outstanding career in terms of research, administration and training over a period now spanning 4 decades.

Achieving the rank of Full Professor in 1989, Professor Beaujot served as the Director of the Population Studies Center on three separate occasions (1985-89; 2004-08; 2010-11). Over this same period, his CV lists 197 publications, including 11 books, 60 papers in referred journals and over 50 book chapters. Rod has published in a wide range of scholarly journals, including both international journals in demography and family studies (Journal of Family Issues, Population and Development Review, Population Studies, Population, Demographic Research, Social Indicators Research) and Canadian journals (Canadian Studies in Population, Canadian Journal of Sociology, Canadian Public Policy, Cahiers québécois de démographie). Rod has also acted as the primary advisor to 14 PhD and 28 MA students, not to mention serve in a secondary supervisory role or examiner for an additional 80 graduate students. For this reason, Rod has been an inspirational and influential figure to many, including dozens of former students who are now continuing his tradition of research as demographers and sociologists in a wide variety of academic and government institutions.

Professor Beaujot has been both the President of the Federation of Canadian Demographers (1988-1992) and the Canadian Population Society (2000-2002). With the FCD, Beaujot led the Canadian bid to hold the 1993 IUSSP Congress in Montreal. At more recent IUSSP conferences, he has organized sessions on the “Causes of Low Fertility” (2005) and “Childlessness” (2013). In addition, Rod was a member of the Canadian Delegation at the International Conference on Population and Development (Cairo, 1994) where he helped fund and organize the IUSSP Distinguished Lecture Series, including the publication of a summary which appeared in Canadian Studies in Population (1996).

Rod has maintained his ties at Statistics Canada, serving as the Chair of Statistics Canada’s Advisory Committee on Demographic Statistics and Studies (1994-2014). Rod has repeatedly recognized the quality of the work produced by Statistics Canada as well as the importance of his early work experience at Stats Can in shaping his future research accomplishments. He has also acted, very recently, as both Executive Committee Member of the Canadian Research Data Centre Network (2010-2014) and Academic Director of Western’s Research Data Center (2004-2014).

As Professor Emeritus of Sociology at Western, Professor Beaujot has continued on in his role as Principal Investigator for the “Population Change and Life course Cluster” (2007-2014), one of only seven strategic research clusters funded by the Social Sciences and Humanities Research Council. The primary emphasis of this cluster has been to promote research on the relationship between population structure and the lives of individuals. In so doing, this research cluster has brought together the joint efforts of over 200 affiliated researchers from over 30 Canadian universities and government agencies. Just this past March, this strategic cluster had its culminating event after 8 years of operation in its final Conference on Population Change and the Lifecourse: Taking Stock and Looking to the Future. Consistent with Rod’s long term academic interest, much of the research produced by this cluster demonstrates the utility of demographic and social research in informing social planning and public policy.

Professor Beaujot's research interests include evolving demographics (fertility, mortality, immigration, internal migration, aging, regional distribution) and implications for social policy (in areas such as health, family, labour force, language, multiculturalism, equal opportunity, pensions, education, and social security). On fertility, his research interests include questions of gender and families, especially the earning and caring activities over the life course as seen in the division of paid and unpaid work, and how these form the context through which to interpret childbearing behavior. Yet perhaps as the most outstanding research accomplishment to date, Professor Beaujot was honored in 2001 with the John Porter Award from the Canadian Sociology Association for his book Earning and Caring in Canadian Families (Broadview Press, 2000). This award is meant to recognize an “outstanding published scholarly contribution within the ‘John Porter tradition’ to the advancement of sociological knowledge of Canada.”

As Ellen Gee wrote in her letter of nomination “While lip service is often given to the relations between production and reproduction, these are rarely analyzed through the interplay of family and work, at both the macro and micro levels of analysis. The general theoretical orientation based on the tension between caring and earning provides a useful and interesting way to understand much of contemporary family life and family policy. By defining families as comprised of people who come together in instrumental and expressive activities, specifically in earning a living and caring for each other, Roderic Beaujot provides much insight into the dynamics of gender, family, and work, along with much supporting evidence for the stability and change in these dynamics in Canadian society. In the Porter tradition, Beaujot pays much attention to the various bases for inequality, including inequality by gender. He highlights the ways in which the interplay of family and work, and the division of productive activities, need to be central to our understanding of gender inequalities and stratification. This brings him to policy orientations that seek to establish greater common ground across gender and a more equitable balance of paid and unpaid work between women and men”.

Although we obviously know the great impact Rod has had on demographic knowledge in Canada, we stayed close to his Curriculum Vitae, to prepare the above part of this letter of nomination. This results in statistics, such as about 200 scientific publications, several dozen of graduated students supervised, etc. As you can see, this can make you dizzy or perhaps envious. But that does not fully convey the great reputation he holds among Canadian demographers and most notably among colleagues that most know him. In accordance with the nomination procedures, the nominating committee received four letters of support from eminent Canadian demographers who have known very well Rod Beaujot, some of them for 40 years. All letters of support were very complimentary and stressed how generous he has always been in sharing his “encyclopedic knowledge”, as Kevin McQuillan puts it, with collaborators and in guiding students.

If, like T.R. Balakrishnan we resume in a few words Rod’s illustrious career and, incidentally, the content of the letters of support, we would use three words to summarize Rod’s contribution: diversity, quantity and quality. Diversity in the object of research; Rod Beaujot has virtually studied all the demographic domains and it might be too long to enumerate them here, but Evelyne Lapierre-Adamcyck does in her letter of support and she also nicely sets in a short sentence this remarkable capacity to treat deeply a great number of research domains : “Rarely do we see a researcher deal comprehensively and appropriately as great a variety of areas of interest”. Anatole Romaniuk talks of his omnipresence in the field of demography in its various dimensions the creation of science, the transmission to younger generations and the diffusion.

On behalf of the Canadian Population Society, congratulations, Roderic Beaujot, on receiving this much deserved career contribution award.